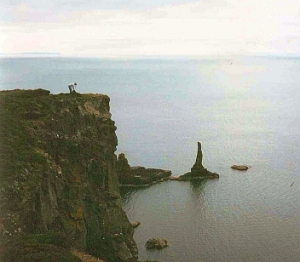 But less of sausages and back to walking.

The walk was through some amazing scenery with the culmination being the three sea stacks called Macleod’s Maidens. The largest one, not seen in the photo, is known as the mother with the smaller two being the daughters. To see the big one you will have to see my painting of the Maidens that is hanging in Reboot bookshop in Accrington (see my website for details) or take a trip to Skye. The coastline here is a wild place with its basalt cliffs containing caves, arches and some impressive waterfalls plummeting into the sea. Well worth a visit and well worthy of some more paintings.

P.S. – this was 16 years ago so I doubt you can still do a climbing traverse the dartboard at the in at Carbost as part of your post breakfast training for those excellent Skye climbs
Next
Previous